After the excesses of the Christmas holidays, a lot of people start the year in a much more healthy and restrained way. The chocolates and pudding are wrapped up and put in the cupboard. The walking boots are pulled back out and dusted off and the bottles of beer and wine are put on a high shelf; out of sight and out of mind. But for some having one dry month out of twelve doesn’t cut it, these people are teetotallers or pioneers. You may think these people are a rarity in Ireland but this is not so! These days, the decision to become alcohol-free has more to do with health and lifestyle choices than with religion. Yet decades ago when pioneer and abstinence associations were being established, it was religious organisations that were doing so. Through their social and charity work they could see firsthand the problems created by excessive drinking and the implications this was having on all generations in society. 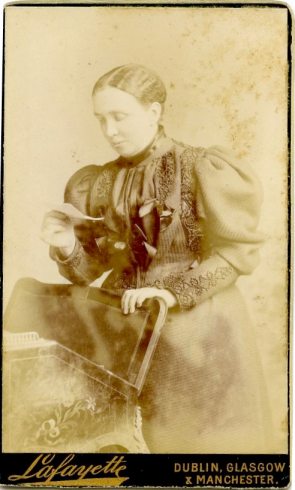 Photo of Lizzie Power, a prominent founding member of the PTAA (UCDA P145/1) 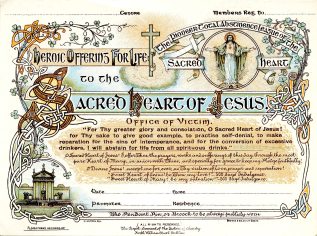 The Pioneer Total Abstinence Association (PTAA) was founded in Dublin in the Presbytery of St Francis Xavier Church, Gardiner Street in December 1898 by Fr James Cullen, SJ. Present at that first meeting were four well known Dublin women, Mrs Anne Egan, Miss Lizzie Power, Mrs Mary Bury and Mrs A.M. Sullivan. Although little is known of these four women they formed the first group of an Association that would grow to become one of the most prominent Catholic movements in the first half of the twentieth century in Ireland. 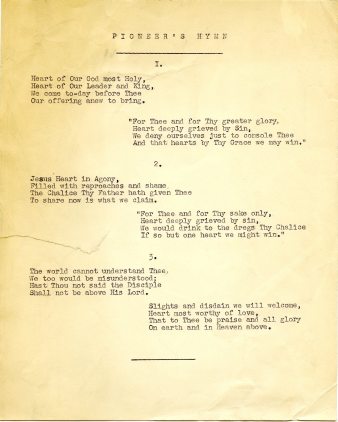 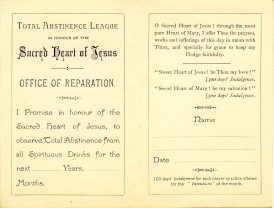 Inside of a membership card for the PTAA (UCDA P145/3)

From the beginning, Fr Cullen envisaged the Association operating under a tightly controlled structure emanating from a central administration. He based the movement on the parish unit with a spiritual director overseeing the activities of each centre. Overall control was administered by a central council based in Dublin. Each centre was affiliated to the central council and also included a president, secretary, treasurer and four or more councillors. A rigid structure for meetings was laid down by Fr Cullen which included the reading of minutes and correspondence, treasurer’s report, applications for membership, temperance business on a local and national level and prayers, the most important of which was the concluding prayer or Heroic Offering. Membership of the Association was based on a probationary period of two years after which full membership was granted. By the end of 1914 membership of the Association had reached an estimated 280,000 and by the 1950s this figure had risen to almost 500,000 members. By 1918 there were Pioneer centres in existence in England, Scotland, the USA, Australia, South Africa and Switzerland.

The Association was initially funded through the sale of Pioneer pins. As the Association began to grow and expand, efforts were made to increase its profile and promote its message. To this end a weekly feature entitled ‘Pioneer Column’ appeared for the first time in 1912 in the Irish Catholic. The column was written by Fr Cullen until shortly before his death in December 1921. It became one of the longest running regular columns in Irish newspaper history and included items such as temperance issues, reports from centres, Pioneer activities including meetings, rallies and pilgrimages and was generally used to publicise the Association. 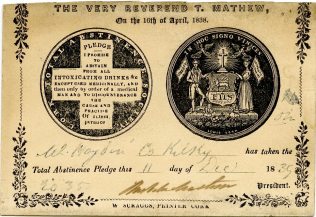 In 1948 under the directorship of Fr Seán McCarron, the association began to publish a magazine to act as the official organ of the PTAA. The Pioneer continues to be published today. The popularity of the PTAA remained steady throughout the 1940s and 1950s during which the Association celebrated two major milestones, the Golden and Diamond Jubilees. Croke Park hosted the celebrations on both occasions. Official figures estimated that approximately 100,000 people attended the Golden Jubilee in 1949. The association also organised the celebrations for the centenary of Fr Theobald Mathew held in Cork in 1954. 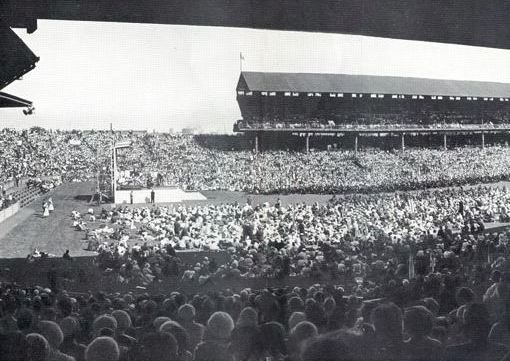 The popularity of the Association began to wane in the 1960s and it struggled during the cultural changes that took place in the 1960s and 70s, attracting fewer members and in general appealing less and less to adolescents and young adults. The PTAA needed a new direction and began to turn its attention to other challenges and possibilities, in particular focusing on Africa and the potential for attracting members in emerging African countries. Today the membership of the PTAA continues to grow in Africa and Latin America. Through its publications, events and website, the Association maintains a presence in Irish society.

So the question remains, will you start the year a Pioneer?

2 thoughts on “Start the Year a Pioneer?”