On 4th May 2018, Irish poet Thomas Kinsella turned 90 years old. An event hosted by the Lord Mayor of Dublin to mark this occasion was held in the Mansion House.

UCD Library Special Collections holds the Thomas Kinsella Collection, containing over 700 items including books, pamphlets and ephemera which Kinsella generously donated to UCD in 2013. The books form a discrete collection reflecting the various phases of Kinsella’s career in poetry. The donation was the focus of an exhibition held in UCD Library entitled Thomas Kinsella, The Poet and the Book which was curated by Dr. Lucy Collins. 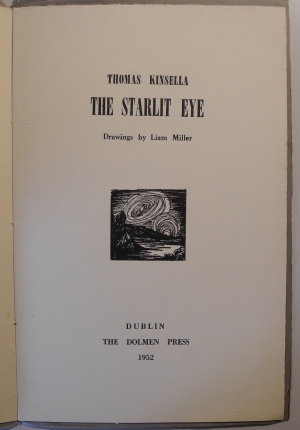 ‘The Starlit Eye’ by Thomas Kinsella

Three sonnets by Kinsella in ‘The National Student’

The UCD Kinsella Collection includes everything from issues of the UCD magazine The National Student, to which Kinsella contributed poems in the 1950s, to fine examples of his work with Liam Miller of the Dolmen Press including Finistere and, of course, The Táin. It also includes his Peppercanister series including his poem relating to Bloody Sunday entitled Butcher’s Dozen. Kinsella’s work as an anthologist, editor and translator is reflected in the collection through items like An Dunaire 1600-1900, Poems of the Dispossessed, which he worked on in collaboration with Sean Ó Tuama and the translation of The Breastplate of St Patrick and The Sons of Usnech. The place of his poetry in Irish education is reflected in the inclusion within the collection of textbooks which contained his work.

Kinsella attended UCD in the early 1950s and it was because of this association that he donated his collection to the university. During his time in UCD, which was then based in Newman House on St. Stephen’s Green, and on Earlsfort Terrace, he began to write for The National Student. It was also while at UCD that he came in contact with Liam Miller of the Dolmen Press with whom he would collaborate for many years. Their first such collaboration was on The Starlit Eye, published in 1952 which was hand set by Kinsella himself. Throughout the 1950s and early 1960s Kinsella continued to work with Dolmen and collections including Another September, Moralities and Wormwood were published. 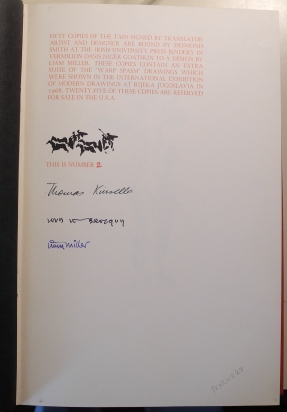 Signatures of Kinsella, Le Brocquy and Miller in Copy no.2 of ‘The Táin’

In our Kinsella exhibition, Dr. Lucy Collins described The Táin as

‘the most beautiful Irish-made book of the twentieth century’.

That publication was a three way collaboration between Kinsella as translator of the epic story of Táin Bó Cuailnge – The Cattle Raid of Cooley, Louis Le Brocquy as illustrator and Liam Miller as printer and publisher. Over 130 iconic Le Brocquy drawings were included in the book. The UCD Kinsella Collection contains many editions of The Táin including the 1969 deluxe vellum covered Dolmen edition signed by translator and illustrator. Translations of the work into other languages are also represented.

Butcher’s Dozen (1972) was the first item published by Kinsella’s Peppercanister Press. This long poem was deliberately produced in a cheap disposable manner to reflect its purpose which was a critical response to the findings of the Widgery tribunal. In the years that followed other titles such as A Selected Life (1972), A Technical Supplement (1976), Vertical Man (1973) and The Good Fight (1973) were all published by the Peppercanister Press. 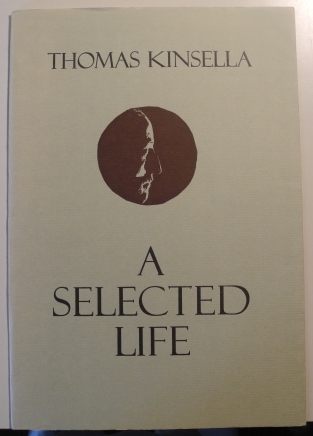 Kinsella was awarded the Freedom of the City of Dublin in 2007.  In honour of his work as poet, editor, translator and critic he was also awarded the UCD Ulysses Medal in 2008. 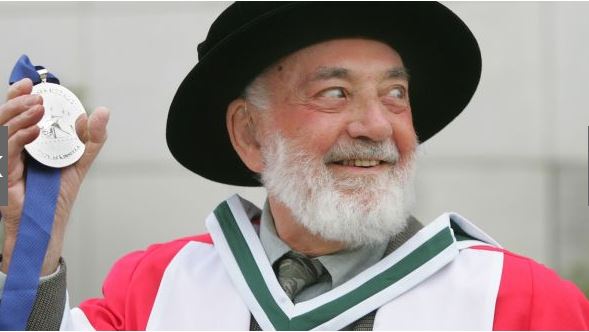 Kinsella being awarded the UCD Ulysses Medal in 2008. Courtesy of the Irish Times