Theobald Wolfe Tone Dillon was born in 1898 and was known as Theo. He was the second son of John Dillon (1851–1927), land agitator and nationalist politician, and grandson of James Blake Dillon (1816–66), founder of The Nation in 1842. His mother, Elizabeth Mathew, was a grand-niece of Fr Theobald Mathew of the temperance movement. His maternal grandfather was Sir James Mathew, a judge of the High Court and a graduate of the University of Dublin (Trinity College). Myles Dillon (philologist and celticist) and James Dillon (independent and Fine Gael politician) were two of his brothers, the others being Shawn and Brian, a Benedictine monk and headmaster of Glenstal School. He had one sister, Nano (Anne Elizabeth). 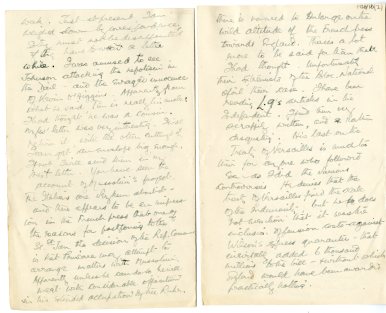 Letter from Theo to his father, John Dillon Esq, discussing the rise of Mussolini and the Treaty of Versailles, 13 January 1923 (UCDA P126/16/01)

Theo Dillon entered University College Dublin as a medical student, with a scholarship in classics and mathematics. He graduated in 1921, achieving first in the entire examination and in 1922 was awarded a travelling studentship in pathology. However, for some time before this he had not been in good health and it was suspected that he had bone tuberculosis. Although many years later it was decided that the trouble was not tubercular, “it sent him on a long pilgrimage to continental sanatoria in search of a cure.”

Letter to his father discussing the occupation of the Ruhr by Belgium and France, page 2 and 3 (UCDA P126/18/1)

This is the period that this collection covers comprehensively. The most important aspect of these papers are the letters Dillon sent to his father from his stay in the various clinics in France and Switzerland. (An interesting feature of the collection is the comments Dillon’s father makes regarding when he received and when he answered the letters.) They are amazingly detailed letters, covering an extremely broad range of subjects through philosophy and science and display a formidable grasp of the politics of the time, in both Ireland and the rest of Europe. His knowledge is garnered from a wide range of newspapers in a wide variety of languages and a very interesting network of friends and acquaintances.

Transcriptions of extracts from these letters can be found below, just scroll down.

Dillon spent a year at Berk-Plage in the north of France and then four years in Leysin, Switzerland, first as a patient and then as an assistant to Dr Rollier, a pioneer in the use of heliotherapy. While working as assistant to Rollier, Dillon married Marie Benninger and spent the year 1928–9 in Vienna studying modern methods in medicine. They moved to Dublin in 1929 with their second child, Marie-Therese, and settled in Killiney. Around the time they settled in Killiney, Dillon was made a Rockefeller Scholar in medicine in UCD, later changed to a College Assistancy, and in 1932 he was appointed Professor of Pharmacology and Therapeutics. He died in 1946. 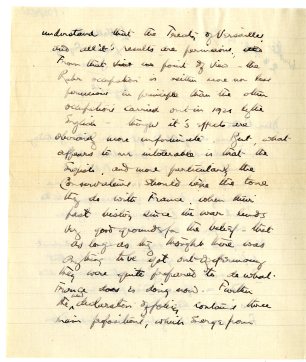 This collection of papers of T.W.T. Dillon was deposited in UCD Archives by Professor Brian Farrell on behalf of his wife Marie-Therese, Professor Dillon’s daughter, on 14 October, 1994.

The letters in this blog are examples of his analysis of contemporary European politics: on the rise of Mussolini, the consequences of the Treaty of Versailles and the occupation of the Ruhr by Belgium and France. Letters P126/16, 18 are written from the Institut Francois de Sales, Berck-Plage, France; letters P126/39, 44, 45, 49 are written from La Vallerette, Leysin, Switzerland. 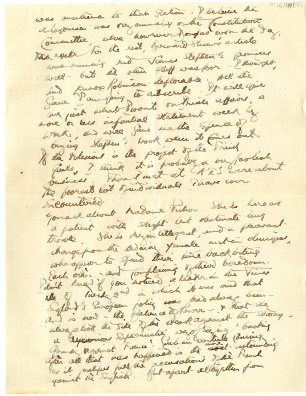 You have seen the account of Mussolini’s project. The Italians are very keen about it—and there appears to be an impression in the French press that one of the reasons for postponing to the 31st Jan the decision of the Rep. Commis. is that Poincaré may attempt to arrange matters with Mussolini. Apparently unless he can do so he will meet with considerable opposition in his extended occupation the Ruhr.
…
I have been reading L.G.’s [Lloyd George’s] articles in the Independent. I find them very scrappily written, and rather disgusting. His last on the Treaty of Versailles is much too thin for anyone who followed [?]—as I did the various controversies. He denied that the treaty of Versailles fixed the scale of the indemnity but he does not mention that it was the inclusion of pension costs—against Wilson’s express guarantee—that inevitably added 6 thousand millions to the bill—and without which England would have been awarded practically nothing.

Politics here are developing rapidly in the direction of annexation of the Ruhr, which is openly advocated here under the euphemism of economic [friction] with Alsace-Lorraine. I regret to say the Catholic party—with their two papers The [?] de Parès & The Action Française are the wildest of all; and the Curé here explained to me that the fault of the Versailles treaty was that Germany was not divided peacemeal (sic)—and—above all—: Prussia stripped of all her Rheinesh possessions. Italy has withdrawn her engineers from the Rhur, and refused politely to send either troops or custom-agents. This has been scandalously suppressed by the French papers, and I don’t know if you got it in the English press.
…
I don’t know if I told you that my Italian friend here was one of the earliest Fascisti. He has told me many interesting things about the origins of the Fascisti, and also about Caporetto, where he tells me the Italians lost 400,000 prisoners. He confirmed the report that it was due to the Communists who arranged with the Austrians to let them through at the most critical point of the line. Apparently these Communists had revolted when stationed at Turin, and they were placed at this point as punishment as it was subject to continual attacks. The Communists promptly arranged with the Austrians, and as a result the whole right wing of the Army was cut off. He is interesting too on the state of Italy after the war—before Mussolini sorted the situation. Something the same as Ireland, with some features even worse—but without the same marked inclination to explosions.

By the way do you remember sending me an article cut out of the Nation—from Basle. I was rather disappointed by your strong disapproval of its contents. Sen. Henry Jouvenal—the writer—is one of the leading radicals in the Senate, and was, if I am not mistaken, against the occupation of the Ruhr. His thesis is that England has no further right to reparations as the damage done to her fleet—the only damage which comes in under the real definition of reparations (i.e. before Gen Smuts inclusion of pensions) has been already reimbursed by the German mercantile fleet. There is a good deal in this I think. As for the debt question he wants it treated as a whole—with the Americans as a party to the settlement—and of course he takes the French news that their debt is not parallel to the other debts—inasmuch as it all went back to the lending nations to pay for munitions. This—I admit—is not so reasonable from the point of view of America—though the English would have had to give the munitions anyway—even if the French had refused to pay for them at the time.

What do you think of the British note? I—as you probably guessed—am more or less outraged. More indeed by the form than the matter. There are however two points which seem to me particularly unfortunate, and for the first—at any rate—completely unjustifiable. The first is the reference to the legality of the Rhur occupation. Considering the history of the Coalition—of which Curzon & Baldwin were members—this seems to be rather cool. Secondly, the question of debts seems to me to be treated with very scant tact, and the whole note shows very scant courtesy towards Belgium.

From your point of view, & from mine, I can understand that the Treaty of Versailles and all its results are pernicious. From that point of view—the Ruhr occupation is neither more nor less pernicious in principle that the other occupations carried out in 1921 by the English—though its effects are obviously more unfortunate. But, what appears to me intolerable is that the English, and more particularly, the Conservatives should take the tone they do with France, when their past history since the war lends very good grounds for the belief that as long as they thought there was anything to be got out of Germany there were quite prepared to do what France is doing now.

I don’t know if you noticed a leader in the Times of [Tuesday] 2nd in which it was said that England’s European policy had always been—and is now—the Balance of Power—& that she always took the side of the weak against the strong—a euphemistic way of saying ‘backing Germany against France’. Such an article coming after all that has happened is the more astounding as it justifies full the accusations of the French against the English. But apart altogether from that side of the question—is it not clear that the Balance of Power is a most pernicious doctrine—as understood & practised in the years before the war—a doctrine which leads inevitably to more terrible wars than any other local cause, for they involve all the powers which go to preserve the balance—incidentally England.
…
At the present moment England is making herself sufficiently nasty to lose all her friends, and is doing no good whatsoever. … You have probably seen that the Bavarian President has already declared that the Treaty of Versailles is broken & will no longer be observed. I believe that he is perfectly right but the awkward thing for England is that he quotes Curzon’s famous note on the illegality of the Ruhr occupation to prove his contention—while Baldwin is doing his best to bury the memory of that ill-fated document & start afresh.