With summer a distant memory, and the harvest period having drawn to a close, Hallowe’en (All Hallows Eve) or Oíche Shamhna was considered a turning point in the traditional calendar year. Cattle were brought from summer pastures to fields closer to the family homestead, and corn, apples, turnips and potatoes were all harvested and stored at this time, along with turf and wood needed as fuel for the cold nights ahead.

As the beginning of the dark season, Oíche Shamhna (literally ‘November Night’), or Hallowe’en, celebrated at sundown on the 31st of October, has long stood out in popular tradition as a time particularly associated with the spirits of the otherworld, and individuals out travelling the road at this time were considered liable to meet with the fairies, the dead or the púca (the mischievous phantom horse that would abduct wayfarers, taking them on terrifying rides across the countryside by night).

‘the dark and sullen Phooka is then particularly mischievous and many mortals are abducted to fairy land’.

However, help is at hand, and we are told that, should we meet with the fairies on this night, those who have been abducted away to the otherworld by them can be returned to us by our throwing the dust from under our feet at their group. Sage advice, though it is worth remarking that indiscriminately throwing dust at groups of passers-by is not advised on this (or any) particular evening.

It was customary on Hallowe’en for bands of youths to group together and call to houses in their locality. They travelled in disguise, wearing masks, old clothes or rags, and on calling upon a house the frightening troupe would enter, playing music on whistles and melodeons, and dancing, while entreating the occupants of the house to ‘help the Halloween party’. For those disinclined to venture forth and face the unseen spirits traipsing the roads on this night however, there was much merriment to be had at home, for a little feast was always prepared for the family at Halloween. Since the vigil of The Feast of All Saints has for many centuries been held as a day of abstinence, traditional foods consumed at this time contain no meat, consisting instead of apple pies, dumplings, barmbrack, colcannon, stampy, punch, tea, fruit and nuts. 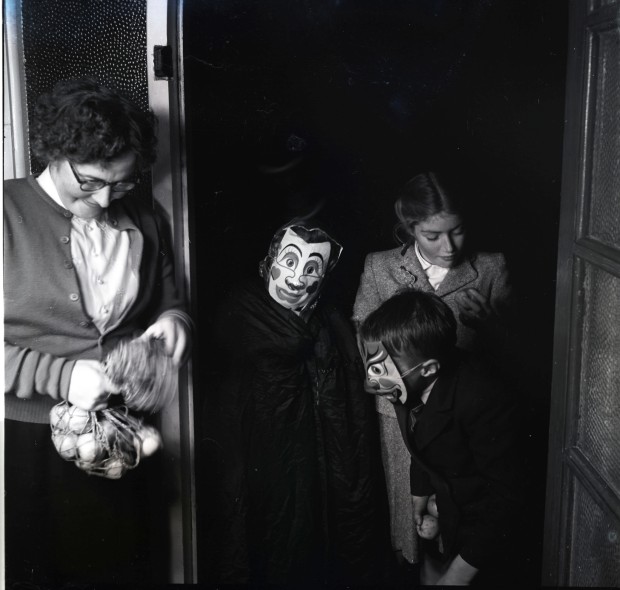 Halloween foods offered more than mere sustenance however, and often foretold the future of those who ate them. This can be seen most commonly in the barmbrack fruit cake into which a ring, silver coin, thimble, chip of wood, rag, or other items were mixed in the making of the cake. The ring foretold marriage, while the coin indicated wealth. Those who found the thimble may have been a little less enthusiastic about their discovery, since it suggested a life of spinsterhood (with a button foretelling bachelorhood). The rag meant poverty and the chip of wood indicated that the finder would be beaten by their spouse! Finally, a little religious medal suggested life as a priest or nun.

A ring might similarly be placed into a bowl of colcannon around which many children sat to eat. With each child armed with a large spoon (and with a life of solitude looming into view) a flurry of potato would ensue in which colcannon flew through the air, over hair and into eyes, with all in eager haste to find the precious ring within. 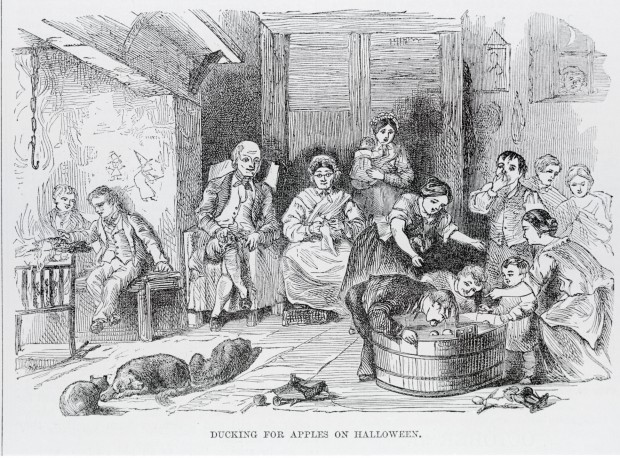 ‘Ducking For Apples on Halloween’, from Robert Chambers’ ‘Book of Days’, 1864.

Individuals unsatisfied by the preternatural suggestions made on this night by either cakes or potatoes had further recourse however to the peeling of apples to foretell their futures. An apple, peeled in one long strip and let fall on the floor, would reveal the initials of one’s spouse-to-be. If both fruit cake, potato and apple all failed however, a salt herring, eaten before bed, would ensure that one’s future spouse would appear in a dream that night offering a cup of water to quench the thirst of the dreamer.

Before retiring for the night (and with a life of gloomy solitude now fully established in the mind) a feast was sometimes prepared for the ancestral dead who were understood to return at this time. The table would be set, the floor swept and a good fire would be put down in the hearth to show welcome to the spirits of our forebears, who would duly partake of the feast laid out for them and finish up the Halloween night’s proceedings in mirth and merriment, the cares of the living a likely source of great amusement for them. 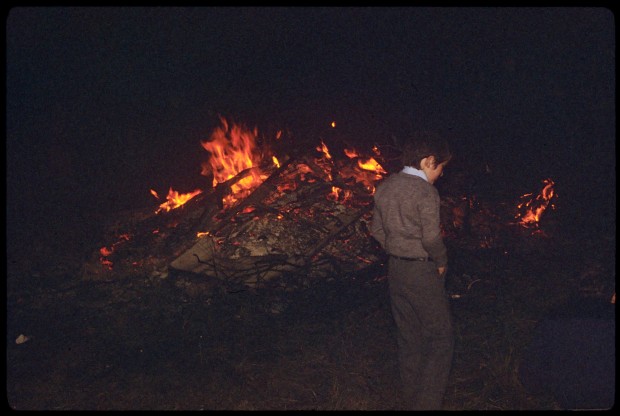