On October 13th 2019, Cardinal John Henry Newman, first rector of the Catholic University of Ireland, will be canonised in Rome.

The Catholic University of Ireland (CUI) was opened in 1854 and it is from this institution that University College Dublin traces its origins. The CUI was established as a result of opposition from the Catholic Archbishop of Dublin, Cardinal Paul Cullen, and other members of the Irish Catholic hierarchy to the non-denominational Queens colleges of Belfast, Galway and Cork. They saw the need for a university that had Catholicism as a central aspect of the Irish educational experience. Newman was invited by Cullen to Dublin to become rector.

The CUI ‘owes it foundation to the reasonableness or even necessity of the principle, that a country possessed of intellectual and moral characteristics proper to itself should be not without some great central school for the development of the national genius and the expression of the national mind. …Its aim is to give a thoroughly Catholic and a thoroughly national education to Catholic youths.’ (CUI calendar 1863)

Born in London in 1801, John Henry Newman attended Trinity College Oxford and was ordained an Anglican priest in 1825. He led the Oxford movement which endeavoured to reform the Anglican Church. He later converted to Catholicism and in 1847 was ordained a Catholic priest. In 1851 he was invited by Cardinal Cullen to become the first rector of the Catholic University of Ireland. The following excerpt from the Dictionary of Irish Biography explains how Newman’s relationship with the Catholic University of Ireland impacted on his writings in which he advocated for a broad and liberal education and the concept of education for its own sake. These writings have had a lasting and global impact on the philosophy of education.

‘Before he could begin to build the university, Newman had first to convince the Irish catholic middle classes that one was necessary. He framed his attempt as a series of lectures given in Dublin between 10 May and 7 June 1852. These five talks were printed, together with a further five, under the title ‘Discourses on the scope and nature of university education addressed to the catholics of Dublin’(1852). The bulk of these lectures were later combined with occasional pieces from the ‘Catholic University Gazette’ to form what is perhaps Newman’s most enduring work, ‘The idea of a university defined and illustrated’ (1873). 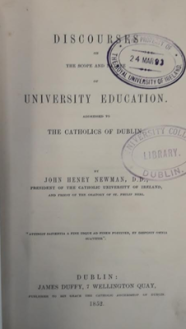 ‘Discourses on the Scope and Nature of University Education’ by John Henry Newman (Dublin, 1852). 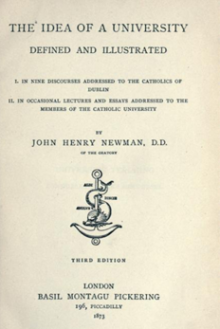 ‘The Idea of a University Defined and Illustrated’ by John Henry Newman (London, 1852).

The CUI opened its doors on 86 St Stephen’s Green on 3rd November 1854 with 15 male students; women were not admitted. It had four faculties: Theology, Philosophy and Letters, Science and Medicine.

The 1858 calendar for the CUI includes a description the entrance exam that gives us an indication of what was deemed a sufficient education in mid-19th century Ireland:

‘The subjects of the entrance examination are, Latin and Greek construing and parsing, one classical work in each language being presented by the candidate for the purpose, translation into Latin; general knowledge of Greek and Roman history, the elements of geography; the first book of Euclid’s elements; the rules of arithmetic, proportion, fractions, decimals, and square root; and the matter of the Gospel according to Matthew, and of any approved catechism. Deficiency in Greek may be compensated by proficiency in mathematics.’

The calendar goes on to explain what the typical day of a student might be:

‘Attendance on Mass; breakfast ; Professors’ Lectures; exercise and dinner; presence indoors at dusk; and sometimes lectures in the evening.’ 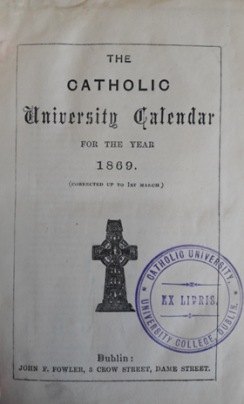 ‘Catholic University Calendar for the Year 1869’.

Timetable taken from the ‘Catholic University Calendar for the Year 1869’.

Newman appointed staff who were well known and would attract attention to the university. Attracting students was another thing. From the outset student numbers were very low. This issue, coupled with the serious problem concerning the inability of the CUI to obtain a charter to award degrees was to impact on the long term success of the Catholic University as an institution. The Faculty of Medicine, however, was a success and there is a clear lineage from the CUI’s faculty of medicine to the School of Medicine here in UCD today. Another enduring UCD institution which emanates from this era was the Literary and Historical Society or L & H which was established in 1855 by Newman. The beautiful University Church, still there today on Stephen’s Green, opened in 1856 and was used for university functions as well as for religious services.

UCD Special Collections holds the early Calendars of the Catholic University 1858-1869 and the Catholic University Gazette 1854-1856, written largely by Newman himself. It also holds a set of The Atlantis: a register of literature and science, a periodical published by the Catholic University between 1858 and 1870 which contained articles by the staff. One of the most well-known members of staff was Eugene O’Curry who was the first professor of History and Archaeology. His book On the Manners and Customs of the Ancient Irish (1873) is dedicated to Newman. Both this work and his Lectures on the manuscript materials of ancient Irish history (1861) derive from lectures given during his time working at the Catholic University.

John Henry Newman remained as rector of the CUI only until 1858 when his relationship with Cardinal Cullen began to breakdown over several issues including Newman’s choice of appointees to faculty and his general feelings of alienation as an Englishman in Ireland. Colin Barr in his book Paul Cullen, John Henry Newman and the Catholic University of Ireland 1845-1865 has a chapter with the very stark title ‘Rupture, Failure and Departure’ describing these relationships and events. With the UCD Letters collection held in Special Collections the copy of a letter from Newman to the Professors of the Catholic University discussing the conflict between his Rectorship and his headship of the Oratory in Birmingham, and proposing his resignation as rector (UCD L 4). This letter and some other letters written by Newman after his return to England are held in UCD Letters collection in Special Collections and have been digitised by the UCD Digital Library.

Letter by John Henry Newman to the Professors of the Catholic University, dated 6 November 1858 (UCD L 4).

The CUI itself continued on throughout the 1860 and 1870s, though it did not flourish, and in 1883 its administration was taken over by the Jesuit fathers and degrees were awarded by the Royal University of Ireland. It was from then that the college on St Stephens Green became known as University College, Dublin.

UCD Special Collections holds the library of the Catholic University of Ireland containing 17,000 volumes, includes books from 15th -19th century, maps, periodicals, manuscripts and pamphlets. This library forms the nucleus of UCD Special Collections and includes books and Irish language manuscripts once owned by Eugene O’Curry. As well as the Newman letters mentioned above, Special Collections also holds some portraits of Newman as well as commemorative literature from the 1954 Catholic University of Ireland Centenary celebrations. We also hold a Newman collection containing all works written by Newman himself in various editions and books about Newman and his influence on education. The archives of the Catholic University and those of the Literary and Historical Society are held in UCD Archives. 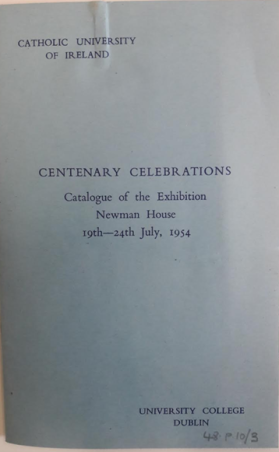 Exhibition catalogue for Centenary Celebration of the CUI in 1954.

Programme of the Centenary Celebrations of the CUI in 1954.

‘I look towards a land both old and young; old in its Christianity, young in the promise of its future… I contemplate a people which has had a long night, and will have an inevitable day. I am turning my eyes towards a hundred years to come, and I dimly see the island I am gazing on become the road of passage and union between two hemispheres, and the centre of the world… The capital of that prosperous and hopeful land is situated in a beautiful bay and near a romantic region; and in it I see a flourishing University, which for a while had to struggle with fortune, but which, when its first founders and servants were dead and gone had successes far exceeding their anxieties.’

Newman’s time in Ireland as rector of the CUI, though short, is an important aspect of his life. The CUI is often remembered as a failure. However, UCD, which is today Ireland’s largest university with an enrolment of 32,000 students, traces its foundations to the Catholic University, this small institution which opened its doors to just 15 students in 1854. While the UCD of today may not be exactly what Newman had envisaged, his dream of a flourishing University did come to pass; throughout the 20th century UCD as an institution had a profound impact on the foundation of the new Irish state and now in the 21st century seeks to amplify the impact of its scholarship and research on a global stage. 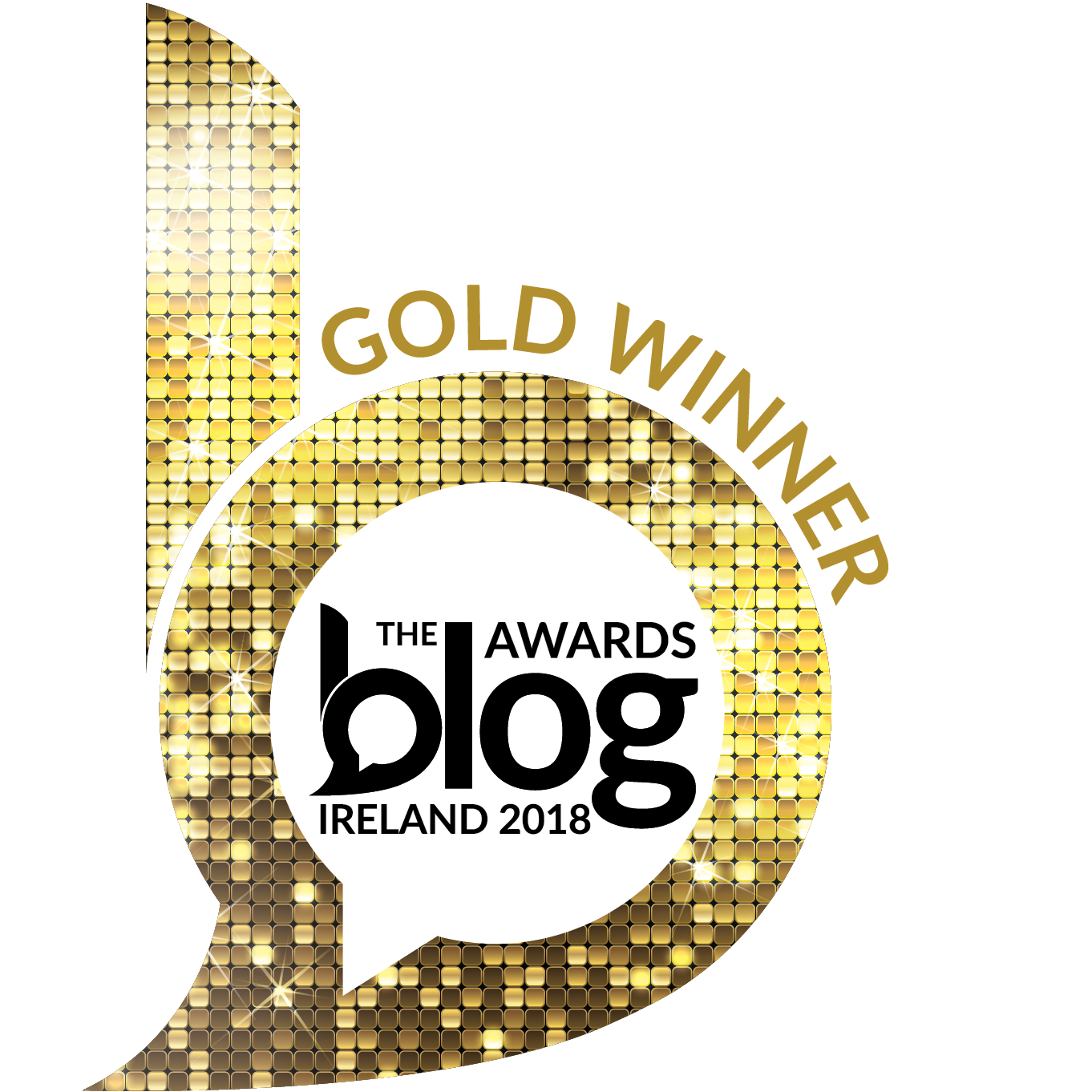